Technology is driving more self-service options in branches and having a massive impact on how branch staff interact with customers. These two closely interconnected factors will determine the fate and future of the brick-and-mortar channel in banking. For retail financial institutions that accelerate their transformation strategies, branches striking the right balance between people and technology can remain productive weapons.

The branch’s obituary has been written before, but in 2019 have branches finally become obsolete?

“I don’t think there is anyone in the industry who can truthfully answer the question of whether bank branches will disappear,” says Joe Sullivan, CEO of Market Insights. “There are far too many dynamics in play.”

One of those factors is the sheer number of locations involved. At 87,700 there are still a ton of bank branches, and another 20,562 credit union branches.

Incontrovertibly, banks have been shedding branches, and steadily doing so since 2009 — 11,251 to be exact, a drop of 11.4%. The number of credit union branches, by contrast, has remained basically flat over the same period.

More than half of the top 100 U.S. banks reduced their footprint by more than 50% over the past five years, according to McKinsey. The biggest 12-month decline for occurred between June 2016 and June 2017, when more than 1,700 U.S. bank branches closed. The pace slowed in 2018, however. 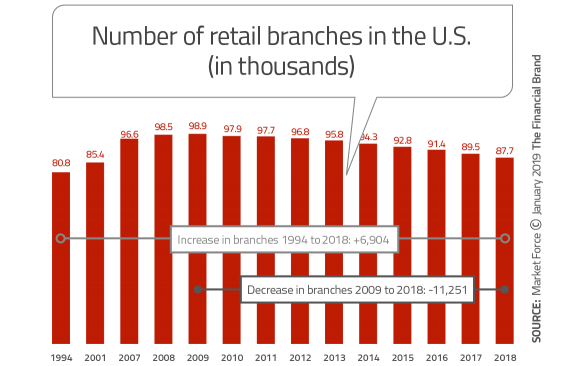 A separate study by Codigo also supports a slowdown in the pace of branch closings. Four out of five banks and credit unions (81%) said they had no plans to close branches in 2018, a significant change from the prior year when nearly half (48%) said they would be closing locations.

The two primary drivers of reduction in the number of branches have been (1) consolidation and the resulting pruning of overlapping branch networks, and (2) large retail banks exiting smaller or slow-growth markets. There’s broad agreement that the first trend will continue, but the second may be finished — at least for now.

“The branch of today is going away — not physically, but in how it delivers service.”

JPMorgan Chase and Bank of America have both announced plans to open hundreds of new branches as they crack into new markets. Frost Bank in Texas also just announced that they will be opening 25 more branches — about one branch a month in both 2019 and 2020 — as it adds to its existing network of 126 locations. Such developments have some branch proponents suggesting the industry may have reached a turning point.

“Branches will continue to follow shifts in demography as new areas develop,” says John Hyche, Principal and SVP of strategic consulting at LEVEL5. “These moves reaffirm the popularity and value of physical channels in establishing brand recognition and gaining market share.”

Not just a couple of megabanks are opening branches. Codigo’s research revealed that nearly half (48%) of all banks and credit unions had plans to add branches versus only about a third that had similar plans 12 months earlier. Plans to remodel branches also shot up 21% in Codigo’s year-over-year findings.

Banks and credit unions that are opening up branches “are being much more strategic about it in terms of placement, square footage, and how they’re staffed,” observes Chuck Rogers, Financial Services Practice Leader for Market Force Information.

But these strategic moves won’t change the overall trend. Sullivan notes that the shrinking profitability of legacy branches, especially in less profitable regions of the country is a big factor. “There aren’t enough growing markets to reverse the trend in net branch closures,” he adds.

“Financial institutions are being forced to come to grips with the reality that the branch of today is going away — not physically, but certainly in how it delivers service to consumers,” states Brian Nutt, President of Codigo. “To survive and thrive in this new reality, banks and credit unions must recognize the branch as just one piece of how their brand communicates with their client.”

In the long-running debate over the role and future of the branch, ultimately the only opinion that counts is the consumer’s. And right now, data shows that while consumers use physical bank and credit union branches less often than they once did, they still use them quite a bit, even as they have adopted mobile banking.

“Banking is still in the business of providing a physical buying experience for the majority of consumers,” observes David Kerstein, President of Peak Performance Consulting Group. “Although people don’t need branches, they still want them. And it’s their money. When things get complicated, they want someone to talk to.” 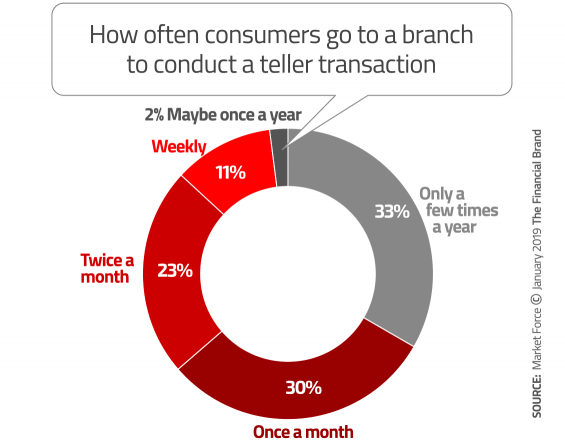 John Hyche thinks the 64% figure for teller visits is “staggering.”

“Why do consumers bypass the most convenient branch in the world — the one in their pocket — to actually go into a building?” Hyche wonders. “Perhaps there is more value in the branch experience than we realize.”

Reider points out that there are consumers segments who remain pure branch users, including “high-value segments such as small businesses and affluent seniors.”

This is not a rural versus urban distinction, either. Chase, which has some of the most advanced digital capabilities in the industry, still gets three quarters of its deposit growth from people using branches.

“Our best customers and most engaged are ones using both branches as well as digital.”
— Sol Gindi, JPMorgan Chase

“Our best customers and most engaged are ones using both branches as well as digital,” Sol Gindi, Chase’s Chief Administrative Officer told Reuters, something that three quarters of the bank’s accountholders do.

All this suggests that “branch versus digital” debate is the wrong mindset. The focus should be on what the consumer wants.

The fact that almost one quarter of consumers say they visit a branch at least once a month to speak with a personal banker or advisor puts great emphasis on making that visit count. As transaction volume continues to shift to digital, the opportunity — and necessity — is created to redirect resources to higher-value sales and advisory roles. 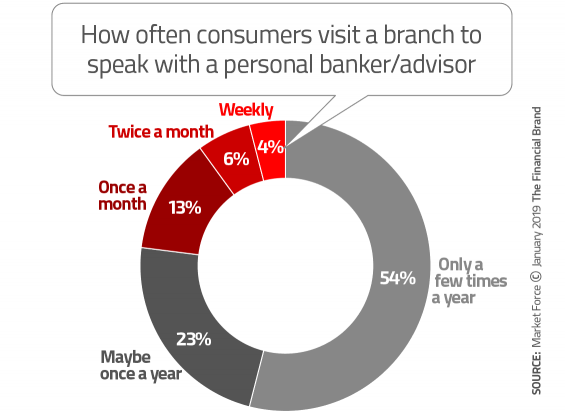 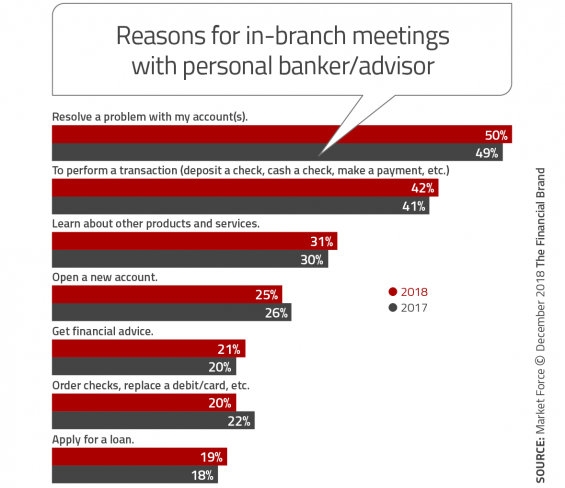 “Think of the potential value of these personal interactions!” exclaims John Hyche. “They represent great opportunities for customer retention, deeper wallet share, and referrals from happy customers.” The takeaway for financial institutions — particularly the community-scale players — is the need for preparation and execution.

“Customers place particular value on the physical location for advice and service,” agrees David Kerstein, “but financial institution delivery of those services has a long way to go. Staff does not yet have the skills. This should be a critical investment priority over the next few years.”

One essential, the experts agree, is good interpersonal skills, especially considering that the top reason for meetings with a personal banker is problem resolution.

“‘Hire the smile, train the skill,’ has become the operating mantra for institutions that see the high-value of in-person interactions,” says Hyche.

Use of technology and automation tools in branches tends to fall into two schools of thought. One is to focus on self-service as much as possible. Another suggests that the branch should be high-touch, with technology assisting employees.

In Codigo’s research, the number of financial institutions planning to equip universal bankers (or other staff members) with tablets shot up 25% in 2017 to 51% in 2018. Interactive kiosks and interactive teller machines both came in at 44% in 2018, a ten percentage point increase. Both video conference technology and the trendy “video walls” saw increases (from 13% to 25% and fro 8% to 28% respectively).

“If someone has taken the time to visit the branch, they’re likely there because they’re seeking in-person dialog.”
— Steven Reider, Bancography

Even though a centralized video-teller function can make a lot of sense functionally and economically, it might not be the best idea says Steve Reider. “If someone has taken the time to visit the branch, they’re likely there specifically because they’re seeking in-person dialog,” Reider points out.

But Joe Sullivan cautions against such generalizations. Consumers’ acceptance of automation varies by market. Often it’s much higher in urban locations, whereas in many rural areas, segments of the population are reluctant to embrace some digital banking technologies, he says. “Their expectations are barely multi-channel, let alone omnichannel,” Sullivan explains.

8 Retail Delivery Strategies for 2019 and Beyond

1. Omnichannel is table stakes. Nearly everyone agrees that a true omnichannel experience is a requirement to succeed in retail banking. “The industry is doing pretty well providing real-time data for monetary transactions in all channels,” Kerstein believes, but he sees limited integration on customer service. “Most institutions still lack the ability to start an application in one channel (e.g. online) and have it be immediately available on others (e.g. a branch).

2. Rethink and remake the branch experience. There is increasing recognition that even in this era of smartphones, it is still worth a visit to a branch if the experience is worthwhile. Several sources pointed to Capital One’s branch cafes that re-imagine branches as coffee bars and co-working spaces as a good example, but there are many others.

3. Keep the bankers relevant. As long as the fundamentals of location, function and product-set are sound, the physical structure is not the key to branch relevance. Rather, maintains Bancography’s Steve Reider, the key is “keeping the bankersrelevant.” That puts the focus on hiring and developing staff with the right skill-sets, giving them decision-making authority, and encouraging them to assimilate themselves into the fabric of their communities or local markets.

4. Fully automated cash and coin handling. Ideally, all or most cash and coin deposits and withdrawals will migrate to ATMs and other machines, freeing up staff time and space. Urban-market consumers are likely more ready for this than those in other areas.

5. Observe and take lessons from the retail industry. Consumers expect and demand technology that works during the online buying experience and they require the in-person shopping experience to reflect that, says Codigo’s Brian Nutt. Elements of this that banks and credit union can include in their “stores” include digital signage, interactive self-service experiences, and remote access to subject-matter experts.

6. Branch relevance is emotional as well as practical. The practical, which includes transactions and problem-solving, must be done well — account opening in fiveminutes, not 45, for example. On an emotional level, the branch must deliver a consistent, increasingly personalized experience if the consumer relationship is to be deeper, last longer and be more profitable, says Market Insights’ Joe Sullivan.

7. Provide branch staff with the tools and training to fill a relationship/advisory role. That includes robust CRM tools, tablets, fast data connections to reduce wait times, and training in proactive listening and other interpersonal skills.

8. Think “digital first”. That’s not a contradiction. Remember, many consumers prefer digital and then use the branch for what they cannot get from digital, says LEVEL5’s John Hyche. “Each channel must work together in an ecosystem that drives engagement.”

How the right tools fuel branch engagement and profits